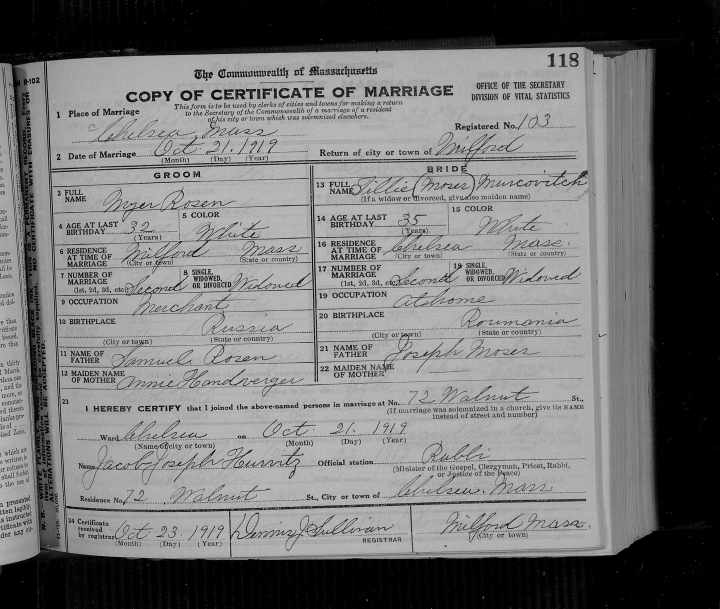 I distinctly recall the many nights I would curl up in bed and cry because we had no family and we were alone.    I wanted holiday gatherings that were memorable and fun, I wanted to run around and play with my cousins and get into trouble for being too loud or getting into things we shouldn’t.  But, I only had one cousin…a boy who was 16 months older than me.  While we grew up close, we lived in different states for many years.

My father spoke of family and he always seemed so sad.  He’d make comments like “I’m the last living ancestor” or “I sure wish I knew what happened to my family” and before this, my Grandma would share tiny bites of stories…never anything too elaborate; I think it pained her…plus we honestly never knew if she was being honest with us or not.  She spoke of Edith, Ruthie, Honey and her father Harry but never her mother Rose.  I’ve actually just ordered Rose’s death certificate because we have no idea what she passed from, only that she wasn’t very old.  Grandma told me things about her father Harry, like he and his brother “Joseph” fled their country and traveled by boat to the United States.  I was told the brothers were 11 years apart in age.  I knew Great Grandpa Harry married a distant or 3rd cousin and I even have in my possession Harry’s Declaration of Intent and marriage certificate.  Shreds and bits of information, but nothing really solid to work from.  His paperwork listed his mother and father, but immigrants often changed their names.  I was given a couple different last name options…making the search that much more trying.

For nearly 20 years, I’ve put hours of effort into locating Joseph and his descendants, having few leads and truly believing I’d be lucky to find just a couple of cousins.  The idea of never finding Joseph and his family wan’t something I was willing to accept.

2 months ago, I took 2 different DNA tests.  When i received the results I was in tears!  1100 relatives, including first cousins to distant cousins.  NO WAY!!!  It was like someone opened up a door for me and things started to fall into place.

Never did I think that my Great Great Grandmother was one of 10 children.  Never did the thought even cross my mind that there may be a whole vast group of people that looked like me, were short like me, had a nose like me…people that if photographed together would be my FAMILY.  I’d actually be a photo where I felt kinship, a place of belonging…I looked like them.  As if this wasn’t enough…this family has worked with me and helped me locate Joseph!  The most amazing family a girl could ask for!!!

My world has expanded by dozens of people over this past 6 weeks, on both sides of my family.  I’ve spoken with cousins on the phone, I’ve heard family stories and been filled with so much information that it’s all starting to get muddled around in my mind.  The feeling, the emotion and sense of complete makes the muddled mess so worth it.  I’ve sat crying so completely full of both happiness, shock and sadness.   It’s beyond what I ever expected!  I look at my cousins faces and I see my smile, my eyes, or even an expression similar to my own.  Just incredible!!

…and I’ve found Joseph and his family.  Quite ironically, the reason I was unable to move forward all these years amounted to names.  He listed his father as Samuel, where his brother listed their father as Charles.  Joseph’s name isn’t Joseph…it’s Myer.  If you can believe this…cousins married distant cousins and “Honey”, who I’ve heard of all my life is a double cousin and she is still alive today.  I will be speaking with her in the upcoming weeks.  I’m soooo excited!!!!  I want to hear everything I can about my Great Grandfather and his brother!

The loss I’ve felt in my heart all my life has been like a gaping pit that nothing could fill.  I wanted a sense of belonging and I wanted to understand and know about my ethnicity, our traditions, the good and the bad family stories.

Over the next several months I will figure out who each and every person is.  I will share the photos I have and build my family story with my cousins.  I don’t want anyone in my family to feel like I’ve felt all my life…not if I can help it at least!

I am home!  I’ve found my roots and I’m so excited for the future with my family!!